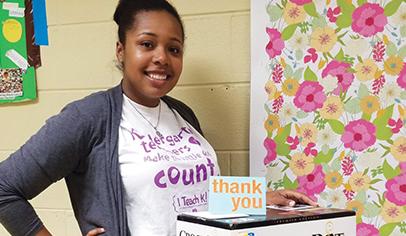 Perseverance pays off for a Chicago parent group in ways large and small.

Facing increasingly trying circumstances, including economic hardship in its Chicago, Ill., community and a drop in enrollment, the Oakdale Christian Academy and Child Care Center PTO turned to school parents for their ideas and support—a decision that strengthened the group, enabling it to build better relationships with students and staff.

By creating a simple suggestion box and survey, the PTO gained valuable feedback; leaders implemented the ideas throughout the 2015-16 school year and increased their numbers to more than 40 parents at monthly meetings.

With its new team of enthusiastic members, Oakdale’s PTO sought to strengthen relationships with faculty and staff, many of whom had experienced pay cuts. The group started the year by asking teachers to create wish lists for their classrooms. More than half of Oakdale’s parents donated items from the list to give teachers for Christmas. They also surprised each staff member with a turkey for Thanksgiving.

“I am overjoyed and thankful for all of the gifts, kindness, and loving gestures shown to me and the entire staff this year,” says Ca’Linda Williams, a preK teacher and director of the Child Care Center.

PTO parents also wanted to familiarize the students with their group, introducing themselves to the student council early on and talking through their goals. They helped the students plan their winter formal, black history fair, science fair, and end-of-year picnic.

The group raised nearly $12,000 in eight months through taffy apple and chocolate fundraisers and collecting Box Tops for Education, and it used the funds to purchase new lockers, school supplies, and an interactive whiteboard.

“There is no better feeling than walking through the halls of the school while being greeted and hugged by children because they acknowledge and appreciate the support we have provided for them throughout the year,” says PTO grant coordinator Risa Lanier.