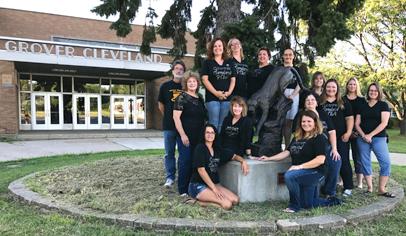 Handling challenges proactively and taking chances build up this group and school.

Despite dealing with the realities of a harsh financial environment—a family poverty rate of just under 80 percent and school funding that hovers near the lowest in the state—the Grover Cleveland Elementary PTSA in Erie, Pa., has managed to defy the odds and not just survive but thrive.

Refusing to let circumstance define its situation, the 125-member group has been remarkably proactive. A seemingly counterintuitive move to prioritize family events over fundraising was widely praised and paved the way to greater successes. A keen desire to stay informed about funding decisions at both the district and state levels prompted committed members to travel to the state capital to tell their story. Very little gets in the way of this enthusiastic group’s efforts to build community and serve its school; in recognition of this spirit, PTO Today has selected the Grover Cleveland PTSA as the 2017 National Parent Group of the Year. 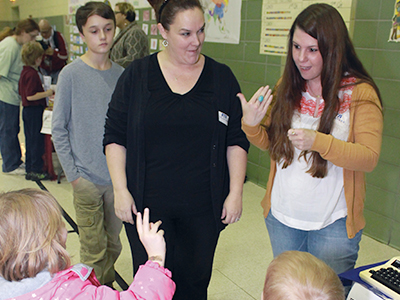 As part of its focus on family events, the PTSA added a multicultural night featuring international foods, student artwork, and eight different cultures, including deaf and hard of hearing.

“In everything we do, we’re completely and utterly motivated by trying to even the playing field for our students, to make sure all of our students can participate in all of our activities and that we do as much as we can to help them succeed in some way,” says 2016-17 PTSA president Michelle Komisarski.

One of the group’s most popular events is an annual school uniform giveaway. The PTSA collects donations of gently used uniforms all year long for this highly anticipated event, which expanded to include free back-to-school haircuts in fall 2016. Five years in, the giveaway now supports all district elementary schools. “It’s really opened our eyes to what a tremendous need there is,” current president Becky Bogle says. 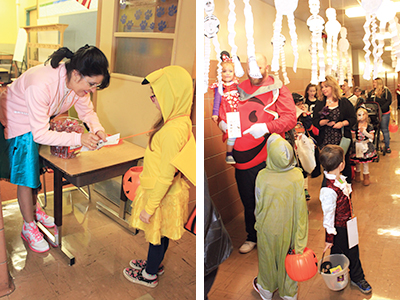 Parents, kids, and teachers had quality time together at a Halloween event that included costumes, candy, and pizza.

Last winter, the group partnered with a church to provide coats, mittens, and hats to needy students. The outerwear was distributed on the same night as parent-teacher conferences, in part to encourage greater participation in the conferences. 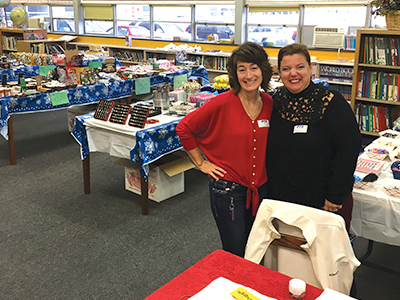 The PTSA supplemented its budget through events like a holiday shop.

Such generosity is a big part of the holiday season, too. Like many school parent groups, Grover Cleveland’s PTSA runs a holiday shop. The difference is the PTSA budgets for and gives shop bucks to all students so that all children at the K-5 school, no matter their economic circumstance, can experience the joy of finding the perfect gift for family members. The PTSA also gets in on the gift-giving: For the holidays this past year, every Grover Cleveland student received a hardcover book from the group.

A New Approach to Fundraising

Although profits from product sales had been declining, it was still a daring decision for the PTSA to move away from traditional fundraising methods in fall 2016. The group started the school year with about $6,000, ran a full slate of events, and still managed to end the year with some $20,000. Leaders did it by working to secure community donations and keeping event costs at a minimum. They also received a small corporate sponsorship, earned profits from spiritwear and concession stand sales (as well as the holiday shop), and won a few grants. 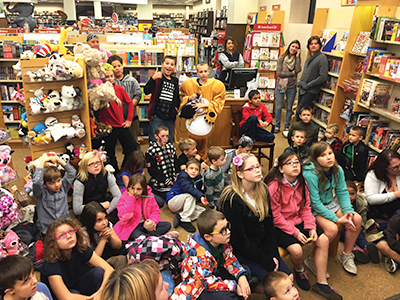 High turnout at a book fair event at Barnes & Noble resulted in $500 in gift cards coming back to the school.

That still wasn’t enough to cover their ambitious agenda—so they took a gamble. The group capitalized on a trend in the area and organized a purse bingo night, making it a community event to draw more than just Grover Cleveland families. Both Komisarski and Bogle admit they felt apprehensive about spending significant sums of money on designer handbags to offer as bingo prizes—but the gamble paid off. The group earmarked a $5,000 budget, spent $4,300, and turned it into a $10,000 profit. Because the event was held in February around Valentine’s Day, a “We Love Grover Cleveland” theme developed. It became an opportunity to honor the school’s teachers, as well as any other teachers, for all their hard work.

That success led to another worthy PTSA initiative. The group had received a bingo machine, so they held a backpack bingo event for students a few months later, giving away about 25 donated backpacks filled with snacks, games, and school supplies.

Keeping Everyone in the Loop

The PTSA’s advocacy efforts speak volumes about the group’s dedication. Despite the community’s need, other Pennsylvania schools receive thousands more dollars per pupil than Grover Cleveland students. Hopes rose when state lawmakers devised a fair funding formula, but the initial plan met resistance. As a result, Grover Cleveland has seen little by way of increased funding and, in fact, won’t experience true equalization for 50 years. But hearing that news only served to strengthen the PTSA’s resolve; it spurred them to take a road trip to Harrisburg to relay their story to state lawmakers. It continues to motivate them to stay involved and informed.

“Our district is going through a lot of changes and we want to make sure the correct information is out there and that we are a resource in that regard,” Bogle says. At regular meetings, the group has a teacher liaison report on district happenings, especially those related to funding issues. The PTSA is also quick to invite key personnel such as the district financial director to talk at meetings to better explain developments.

The group’s ability to get its message out impresses Grover Cleveland principal Michelle Fiorelli. “I think our PTSA is really persistent about getting their voice heard. They use a lot of mediums—Facebook, flyers—to reach as many parents as they can without overwhelming them,” she says. “They’ve been really good at getting parents to complete surveys and sign up to volunteer at one or two events. I think it’s really helped to get a lot more parents involved rather than just  the same couple of people doing everything.”

She’s also thrilled to see entire families attending and enjoying themselves at school events; it helps create a positive culture. “Our elementary school consistently has the highest student achievement data out of the other dozen elementary schools in the district, and we really believe that has to do with the positive culture created here,” Fiorelli says.

The Sky’s the Limit

A couple of the group’s members were invited to speak at the 2017 National PTA Convention in two workshop sessions. The focus was on topics that mesh with Grover Cleveland’s mission: how to build an inclusive parent group community, in particular one that welcomes and supports immigrant families.

“It was another one of those ‘why not?’ situations,” Komisarski says. “We thought we’d submit and see if they want us to speak. We’re just a ‘why not?’ sort of group.”

Be specific about your needs. After forgoing student product sales, the PTSA told parents their volunteer and financial support were both greatly needed. “We told parents we’d be asking for donations, either of their time or to buy an extra pack of napkins or rolls of paper towels next time they’re at Sam’s Club,” president Becky Bogle says. “We set out a donation jar at every event. And it worked. We either broke even or made a little bit of money on each of our events.”

Take time to initiate volunteers. Sometimes amid the craziness of orchestrating an event, it’s tempting to just throw someone in, sink or swim. A far better plan is to motivate and prepare helpers. “Don’t say ‘here’s a project, go figure it out.’ Try to mentor people and help them along the way,” past president Michelle Komisarski says.

Promote your group. Use social media, local media, and other methods to get the word out in your community about what your group is doing and why you’re doing it, Bogle advises. Doing so will benefit your school and its students.