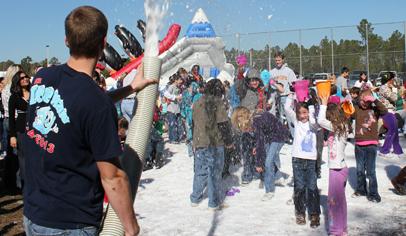 Some events just have more “wow” than others. We profile PTO events that got the whole community excited and asking for more.

A snow day in Florida. A “Touch-a-Truck” fair featuring a Black Hawk helicopter. A schoolwide family camping trip. These parent group events went beyond the expected to deliver a whole lot of “wow!” And by being creative and ambitious, the organizers sent out the kind of positive message that attracts support and encourages more parents to volunteer.

A memorable event doesn’t have to be expensive or complicated. It doesn’t need to exhaust your volunteer force or leave the organizers sleep-deprived. The event just needs to feel special. To capture that feeling, try something a little different and tap into your students’ sense of fun and delight in the unexpected.

The fact that students at Durbin Creek Elementary played in the snow last January might not seem like a big deal. But it was, because the school is in Jacksonville, Fla.

For the past three years, the PTO has sponsored an event called Durbin Creek Cares Snow Much, known affectionately as Snow Day. Kids stomp around in snow manufactured by a machine, barrel down slides coated with ice, and eat shaved ice treats. “They love it,” says PTO president Reisha Rust. “They just have a blast throwing the ice around....They love going down those slides.”

This year, the event got an unexpected nod from Mother Nature when the weather was unseasonably chilly for Florida, making the 12 tons of snow spread on an open field at the school seem all the more authentic. At least 800 people attended.

“It’s not just a typical event,” Rust says. “Attendance has gotten bigger and bigger every year.” The PTO sold 380 advance tickets this year, twice as many as the year before. The event included a bounce house, face painting by local high school students, laser tag, and other traditional carnival features. But the snow and ice were the premier attractions.

It was important to the PTO that the event be unique enough to attract a crowd. Snow Day has an important mission. “Each year, we pick a different charity,” Rust says. “It teaches the kids to give back to the community.” This year, all profits went to Dreams Come True, which fulfills wishes for ill children. A Relay for Life team raised money for cancer research by holding a chili cook-off.

Entry was $10 per child and included access to all activities, a strategy that limits the number of people handling money. Admission for adults was free. Everyone was also asked to donate a canned good, which was given to a local food pantry.

Putting on the Snow Day in a southern climate wasn’t difficult, Rush says. The PTO hired a company that specializes in manmade snow and owns the slides. “Every year we really try to make the event better,” she says. “We are thrilled that families enjoy it as much as they do.”

For an event that would bring families together, the Wilson Montessori PTO in Houston decided to get out of town. Organizers planned a schoolwide camping trip at a site just an hour away. That way, families who didn’t want to spend two nights sleeping in tents could come for the day and enjoy a potluck and s’mores.

“Not everyone is a camper,” says Pam Schubert-Gilbert, the PTO member who coordinated the campout. About 26 families—100 parents and kids—decided they could be campers. Another 10 families came for the day.

When planning the trip, parents discussed activities, such as a scavenger hunt, but ultimately felt that the kids would benefit most from unstructured time. “We decided not to plan anything and just let the kids play,” Schubert-Gilbert says. “Everything in their lives is so adult-driven, it’s nice to just let them be.”

The children loved running around in a field, playing soccer, and riding on bike trails. The most fun thing they did was have a mud fight in a lake. “We just let them be free and make up games,” says Schubert-Gilbert.

The adults enjoyed talking, laughing, and getting to know each other better. Several parents brought guitars and led family sing-alongs.

The PTO chose a date in October so the weather wouldn’t be too hot. The school year would be in full swing, with new families still getting to know each other but feeling comfortable enough to participate. Parents who didn’t own tents and camping gear borrowed or rented.

The PTO charged $10 per family to help cover the $400 campsite fee. The parent group provided the s’mores. The campsite had bathrooms with showers and hot water. The group reserved three group campsites, and each one had a spigot and a place for a campfire. Parents brought food that didn’t require cooking, such as bagels and sandwiches, as well as items that could be easily cooked on a camping stove, like canned beans and coffee.

The parent group borrowed the idea for a camping trip from a nearby elementary school, where teachers had organized a similar trip. Schubert-Gilbert knew exposing their children to nature was a shared goal among parents. She knew a camping trip was doable; she just didn’t have a clue how it would turn out.

And that’s what made it so much fun, says Schubert-Gilbert, who acknowledges that she herself is not much of a camper. “It worked out beautifully.”

Touch a Truck...and a Helicopter

The Touch-a-Truck event this past spring at Elizabeth Shelton Elementary in Shelton, Conn., had the usual police car, fire truck, and tractor. But the event had something extra-special: a Black Hawk helicopter. “It was a huge hit with the kids,” says Chris Panek, president of the PTO’s Father’s Club, “and very educational.”

The helicopter landed in a giant field about an hour before the event started. Students got to sit right in the cockpit. A full crew, including a pilot and copilot, explained everything about the helicopter, which is used by the U.S. Army.

Black Hawks are manufactured and flight-tested in a nearby town; a military officer arranges flights for public events. Planning started months in advance, when a crew arrived to survey the site and make sure the helicopter could land safely.

The Black Hawk is just part of the reason the Touch-a-Truck event was so successful. Organized by the Father’s Club, the event attracted 700 people in 2010, up from 150 the year before. What gave this event its wow factor was the sheer range of cool vehicles. “We try to make it more than just trucks,” says Panek, who rounded up a crane, a fuel tractor truck, a utility truck, construction vehicles, and remote-controlled model airplanes with 3-foot wingspans.

About three months before the event, Panek canvassed the area businesses and government agencies most likely to have trucks. Because many of the companies participated in years past, it was easy to secure support, he says.

Companies that provided vehicles sent along personnel to supervise and educate the students. With very little cost involved, the event was one of the PTO’s most profitable fundraisers, pulling in $2,000. The cost of admission was $5 per person and a maximum of $30 per family.

The event was held in April, and it was short, lasting from noon to 3 p.m. The trucks arrived about an hour early to allow everyone to set up safely and be ready when children started climbing aboard.

Touch-a-Truck ran alongside the PTO’s spring fair, which has traditional games and activities. Volunteers sell hot dogs, candy, and drinks.

This year, the dads worked so hard and had so many cool vehicles lined up, they decided to market the event beyond their own school. They sent flyers to neighboring schools, and children came in droves. “We didn’t want to limit it to just our school’s kids,” Panek says. “We decided it would be for anyone in the community, and it went over really well.”

Circus School
Jackson Street School PTO, Northampton, Mass.
Circus performers taught elementary students to spin plates, juggle sticks, and do gymnastics in a weeklong residency funded by the PTO. Then students staged a circus for family and friends. It wasn’t only fun and games, though; the training helped students develop problem-solving skills, concentration, and persistence, according to the school’s PE teacher.

Entertaining Dads
Lincoln School PTO, Wyckoff, N.J.
Each year, dozens of dads at this elementary school take the stage to perform silly songs and skits for students and family members. Dads don’t just wear costumes and sing and dance; they get sponsorships to defray costs and hold a student contest to pick a t-shirt design. The event raises money for the PTO, but what’s most important, the fathers say, is how much it delights their kids.

Car and Bike Show
Green Garden Elementary PTO, Frankfort, Ill.
This annual event features classic cars, racecars, and cool bikes. Children get a ballot and can vote on their favorite car. To keep the voting from getting too serious, car owners are allowed to “bribe” kids with candy, pencils, and other small prizes. The event includes pony rides, a rock wall, and a performance by a dance troupe.

Rock Show
Brentwood Elementary School PTA, Austin, Texas
The Brentwood Rocks concert is a lot more than a school talent show, although there’s plenty of talent on display. Student and teacher musicians play at the school’s outdoor stage, and the PTA lines up professional bands to headline the show. Music fans can munch on food from a local restaurant and bake sale items and sit on blankets on the lawn or dance the night away.

# PTAsocial 2013-09-22 22:50
What amazing ideas! Thanks for the inspiration, we'll be sharing this with PTAs in the UK too. Over here, we've seen one PTA hiring in a circus and another arranging their own music festival (helps if you have pop connections in the parent community!)
Refresh comments list
RSS feed for comments to this post