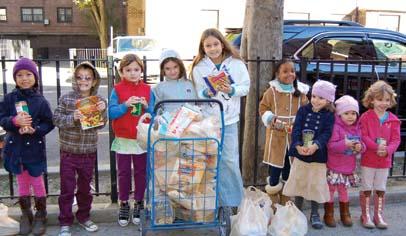 These parent group projects help kids learn about community and their place in it.

Students learn more in school than the finer points of subjects like reading, math, and science. They’re also developing a social identity and discovering how they fit in with the world around them. Many PTOs and PTAs are taking an active role in promoting this kind of social development, with programs targeting community service, cultural awareness, and self-esteem.

The most effective programs weave character lessons into the fabric of a child’s everyday life, says Sabrina Coughlin, cochair of Corlears Cares at the Corlears School, a preK-5 private school in New York City. “I think this is something that can’t be done in grand gestures,” she says. “It is best learned in a steady diet of small gestures.”

Corlears Cares is the community service arm of the Corlears Parents Association. Coughlin believes that when it comes to young children, the simpler and more hands-on the initiative, the more likely the message will be understood. As an example, the parent group runs community service play dates, which typically take place on conference days or half-days. A volunteer takes a small group of children on a modified community service project. It might involve a quick run to the grocery store to pick up some items for the nearby food pantry. The volunteer will take the children to drop off the groceries at the pantry, then spend the next few hours overseeing the play date with the children at a playground or other local spot.

“This is not a big show,” Coughlin says of the food pantry trip. “Someone [at the pantry] greets us and thanks us, and then we have the play date.”

Coughlin says that Corlears Cares looks at community service as a two-pronged effort. One component is the actual service work, while the other piece is communicating the message of service. The communication piece is as important as the actual service work because it continually reinforces the message of social responsibility. If the children are regularly hearing about helping others, then it becomes as much a part of their daily world as playing with their friends, she says.

Several times a year, Corlears Cares produces a publication called “The Chronicles” that highlights community service work. The children create most of the content. This not only delights the authors but also gives other students relatable information. A typical issue includes drawings, poems, stories, and photos. An upcoming issue will have a news story written by an older student who, taking on the role of “reporter,” went to a local food pantry and interviewed its director.

In February, parent volunteers worked with a group of a dozen children to make Valentine’s Day decorations and collect donations of chocolates. “We went to the soup kitchen before it was open for the day. We put up the decorations and put out the chocolates. This is a tiny thing, right? But it is supporting them in a nice way,” Coughlin says.

At the Frances S. DeMasi Middle School in Marlton, N.J., several community service initia-tives take place each year, but the school also looks for ways to impart character lessons directly to the children. A recent initiative, called Common Ground, appeared to be a big hit, says Linda House, president of the PTA. The idea for Common Ground was to help children see that they can simultaneously have things in common and have differences with fellow students.

At the start of the project, each student wrote down on a slip of paper the three most important nonmaterialistic things in their lives. A trend quickly emerged, with children writing down family and friends as the first two most important things on their lists. “All of us, no matter our age, race, height, or anything—you first care about family and friends,” House says. “That is pretty much true for everyone.”

The third item was typically something individual, such as a special skill or talent, like soccer, football, or dance.

The children began to see how much they had in common and also how they each had something special to offer. They were then encouraged to depict their commonality or uniqueness using art. Some students created sculptures and paintings; others expressed their ideas through photography. One sculpture showed three girls suited up for their favorite pastimes—dance, soccer, and cheerleading—and they held hands with a globe behind them.

As part of the project, the students’ artwork was on display for one month at the nearby Noyes Museum of Art in Oceanville, N.J. House says she thinks that by allowing the students to come up with their own artistic expression, they were better able to understand the impact of the Common Ground concept. “It was a tangible thing, instead of listening to a presentation about putting yourself in someone else’s shoes.”

The school also took the slips of paper that had the original lists from all 856 students and displayed them around the school.

House says the PTA was able to support this program for nearly no cost. The parent group hosted a reception at the museum when the artwork was on view and served refreshments donated by parents. “It was like a grand opening reception and the kids got really excited about that,” she adds.

As far as principal Irene Romanelli is concerned, Common Ground was a success. “Part of the developmental stage of early adolescence is developing a sense of identity,” Romanelli says. “Common Ground offered students the opportunity to share matters of the heart through an artistic project. As with all learning, it is the process that matters most.”

Another parent group opting for a hands-on approach is the Collins Elementary PTA in Livingston, N.J. Copresidents Liz Conklin and Stefanie Lichtstein recently overhauled the school’s community service program so that the children are more directly involved in managing collections to various charities.

“We felt that putting a can into a bin wasn’t doing our kids any good,” Lichtstein says. “We want them to understand things, like that there are kids who don’t have shoes.”

Now each grade has a project run by the children. As an example, the 4th graders ran a collection of slightly used shoes with the Soles4Souls organization. To kick off the program, Lichtstein created a promotional video that was shown to the students, and then 4th grade “ambassadors” went to classrooms throughout the school to promote the program and encourage giving. The idea was to have the children look in their closets and find shoes to donate so they could grasp the concept of giving, rather than simply being handed a canned good or cash from a parent to bring to school.

The 4th graders were responsible for collecting the shoes, piling them in a designated spot in the gym, and helping load them into cars to be brought to an area collection site.

To drive home this message of why it is important to give shoes to less fortunate children, the PTA ran Mismatched Shoe Day, where the students were allowed to come to school wearing mismatched shoes. The idea was to show the children that not wearing a pair of shoes will, after a while, feel pretty uncomfortable.

“In this world, in this economy, kids need to learn to give back,” Lichtstein says. “We all need to learn that. The life lesson they’ve learned from this will go a lot further than any technology we could buy.”

The Life School Oak Cliff campus in Dallas is finding success in one-day retreats that are offered each year to its 1,200 students. There are separate boys’ retreat and girls’ retreats; both are held in spring. At each event, students bring a parent or other significant adult. The retreat runs for several hours on the weekend at the school campus. The goal is to give students time to bond with the adult accompanying them as well as learn character lessons and even life skills. One workshop last year covered the basics of financial planning for the oldest students.

But the primary focus is on developing character and learning about character from positive role models.

Of the boys attending the retreat, many have not had positive male role models in their lives, notes Jacqueline Bell, a PTO vice president who ran the boys’ retreat. So last year she focused on bringing in motivational speakers who would help the boys see that hard work and strong character can pay off. For example, one speaker last year was Bruce Davis Sr., a former NFL football player who grew up in the Dallas area. Davis told the group he excelled at football in college and professionally not only because of athletic talent but because he was “coachable and he worked hard,” Bell says.

A big emphasis of the workshop was on treating others with respect. Bell says that the retreat had such an impact on her own son that he is now noticeably more polite. In fact, Bell jokes that recently she overheard one of her nieces scolding her son, saying, “Will you please stop opening the door of the car for me!”

She also says the retreat made a big difference to other boys as well. The school has seen fewer detentions this year with the boys who participated in the retreat a year ago.

The boys’ retreat cost about $1,000 to put together, but the group made up for that by charging $5 per person. Bell says she kept costs down by recruiting speakers who are public officials, such as the local deputy sheriff. “One hint,” Bell says, “is to first look to your elected officials because they can’t take money. Then go to your nonprofits. They tend to speak for free or a small donation.”

Shanecka Hartfield volunteers with Bell at Life School. She wanted to do a similar confidence-building retreat for girls. Hartfield is actually the mother of two boys but says she so appreciates the strong female role models from her childhood that she wanted to help create a similar experience for the Life School’s female students.

“This is something that has been a passion for me for years,” says Hartfield, who serves as executive vice president of the Life School Oak Cliff PTO. “I saw strong women growing up. I wanted to provide some kind of forum for mothers and daughters, to help them gain tools, to gain knowledge, [and] to provide them with a message that would last a lifetime.”

While last year’s girls’ retreat followed a format similar to the event for the boys, it gave girls an opportunity to do some different hands-on exercises. The girls were asked to draw a picture of their role model, Hartfield says. It turns out, most drew pictures of their mothers. 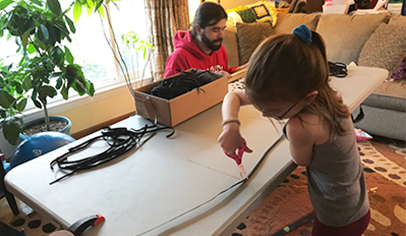 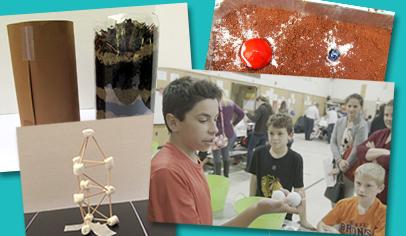