A Family Tradition of Volunteering 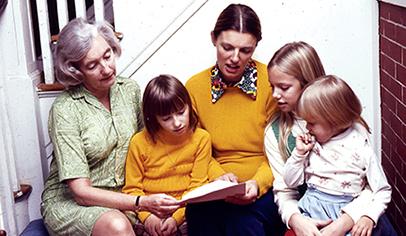 These parents pass the “volunteer bug” on to the next generation.

“By observing parents [as they] volunteer,...children may learn that it makes sense to sacrifice something for a greater good.” René Bekkers, VU University Amsterdam Center for Philanthropic Studies

When you stock the shelves at the book fair or provide cookies for the bake sale, you’re not just helping the school community—you are showing your own child the importance of helping others. And one day your child, drawing from memories of his mother sorting magazine orders or his father collecting carnival tickets, will be more likely step up as a volunteer at his child’s school.

Research shows that the drive to volunteer can be intergenerational, much like family traditions and personality traits are passed along. There is evidence of this in PTOs and PTAs, where some of today’s leaders were raised by a mother or father who was a volunteer. Now those leaders are paying it forward and serving as role models for their own kids. Here are some of their stories.

Working Side by Side

Mary Lynn Jellison is a former PTA president who raised two daughters in Melrose Park, Ill., during the 1970s and 1980s. She says it is no surprise that her daughter Michelle McCorry is an active PTO volunteer—after all, Michelle went to her first school event when she was only 3 weeks old. Once a month, the PTA sold hot lunch to students, who otherwise went home to eat at noon. Mary Lynn loved participating, so she brought along her infant daughter. “I was always teased that I never missed a lunch sale,” she says.

Daughter Michelle says when she thinks of her elementary school days, she recalls her mother always being there. A particular memory of her mom volunteering sticks out for her: “I remember sitting on a desktop in the principal’s office chitchatting with the secretary while my mom was making copies,” she says.

In those days, making copies was a lot more involved than pushing a few buttons on a copy machine. School volunteers like Mary Lynn used smudge-prone mimeograph machines to copy flyers that were sent home with students.

Now the mother of three boys, Michelle got involved at school when her oldest started kindergarten at Admiral Byrd Elementary in Elk Grove Village, Ill. She completed a two-year stint as PTO president in 2013 and is now the hospitality chair.

“It was natural,” she says of her volunteer work. “Some of my friends said it was a debate [for them to volunteer or not]. I never had that dialogue in my head. It was just like breathing.”

Michelle often uses a secret weapon to help make events a success—her mom. In fact, Mary Lynn helps out so often that the school principal calls her “Grammy.” At an ice cream social last year, she picked up the ice cream for the event and served it alongside the teachers.

Michelle says she’s hoping her sons catch the volunteer bug. “My husband volunteers for the PTO and in the community,” she says. “I hope all three boys will be involved fathers, as well, especially since we include them in our efforts. Our sons know that our family values giving our time and talents to others.”

Liz Adams Mohan takes a ribbing from her siblings that she’s a clone of their mother, who was a devoted volunteer. But she’s fine with the jabs; volunteering is one of her passions, too.

Liz has held various volunteer roles at Tunbridge Public Charter School in Baltimore. In 2010, when the school first opened, she stepped up as PTO secretary, but not before asking her mother, Mary Kate Adams, for advice. Among other things, Mary Kate recommended that her daughter have a good sense of humor.

Mary Kate, who was a PTA volunteer for more than 20 years, recalls how in the late 1960s one board member would bring a record player to the meetings and play the song “Harper Valley PTA” and that “we’d all laugh our heads off.”

Now PTO treasurer, Liz says her children tag along with her, just as she did with her mother. “I absolutely want to pass the idea of volunteering on to them,” she adds.

She likes to assign them little jobs. For example, if there are coins to be counted after a fundraiser, the kids will do it.

Mary Kate recalls her own mother volunteering back in the early 1950s at what was then called the “mothers club” at the high school. Her mother was a Red Cross volunteer, as well. “So I had a lot of examples of volunteering,” she says. “And my Liz got it from me.”

“When I visit her, she wants me to go to the school and it’s wonderful,” Mary Kate adds. “I’m so happy there; it reminds me of myself and my friends.”

Like her mother before her, Angela Beadle enjoys a challenge. As PTA president at Pleasant View Elementary in Franklin, Wis., last year, she helped the PTA select technology, like tablets and interactive white boards, for the school. The goal is that by the end of 2015, “every student at our school will have some form of smart technology, all funded by the PTA or fundraising committees,” Angela says.

As it happens, Angela’s mother had a similar challenge 30 years ago, although the state-of-the-art technology she helped implement was an Apple IIe. Carol Birdsell describes the desktop computers as “monstrosities.” But in 1983, Lincoln Elementary in St. Cloud, Minn., received several of them for free. The PTA helped order software and teach students the basics.

Angela likes to share PTA stories with her mom, who says she has yet to be surprised by anything her daughter tells her. “When I first became president, I was scared out of my wits,” Angela says. “But I have someone I can relate to. I can call my mom and say, ‘You will not believe this,’ and she says, ‘Yup, I had the same thing.’ There is someone to help me along.”

She, in turn, advises her kids on volunteer opportunities and frequently brings them along to PTA meetings. “I hope my children continue the legacy that has come before and remember the value of service to others comes in many roles and to seek out a role they can serve in.”

Pass It On: What You Can Do To Foster a New Generation of Volunteers