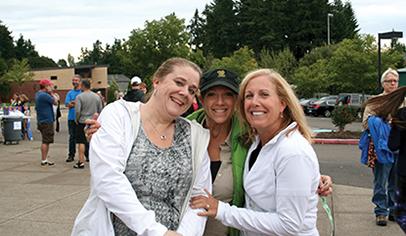 Our first two-time Parent Group of the Year winner adapts to changing needs of middle school kids and parents—10 years after first winning.

Being a middle school PTO is not easy. Adolescents tend to disengage, then parents pull back. So it’s tough to get kids excited about activities and even more challenging to involve their moms and dads. But the creativity and energy of the PTO at Rosemont Ridge Middle School in West Linn, Ore., has fostered an environment where parents jump in to help with a series of events that students look forward to.

The group’s successful events—and its willingness to adapt to new circumstances—are a few of the reasons why the Rosemont Ridge Middle School PTO was selected as PTO Today’s 2014 National Parent Group of the Year. Having previously won this award in 2004, the group is also the first PTO ever to be recognized twice as the National Parent Group of the Year.

The PTO created a series of grade-level events to help students adjust to middle school and prepare for high school and beyond. Sixth Grade Survivor helps incoming 6th graders get acclimated. In groups led by older students, the 6th graders compete to open lockers, wrap each other up as toilet paper mummies in the bathroom, and learn school trivia, among other activities.

“We’re trying to take away the mystery and the fears that come with going to a new school,” says PTO vice president Kathryn Brandeberry. “We’re telling them that ‘this is your school; we’re so excited you’re here.’ They learn their way around by stopping and doing something so it’s memorable to them. They make new friends, one more connection to make them feel at home.”

Seventh graders attend an event called Halfway to High School. Former Rosemont Ridge students who now attend high school—some who are student leaders and some who are not—talk about their experiences and answer questions, informing the younger students about such requirements as foreign language classes and activities like choir. They learn about study skills. The 7th graders also look at their transcripts to understand how course credits and GPA calculations work. Prizes from the high school help spur excitement.

The Career Day/Real Life Fair is for 8th graders. The event is held after students take the ACT exams, which help determine career aptitudes and interests. The Career Day offers kids a chance to speak to adults in a wide variety of jobs, from nurses and emergency medical technicians to CEOs and pro basketball players. Of the 52 adults who volunteered, many were connected to Rosemont Ridge: An author had children who previously attended the school, a police officer currently has children there, the president of a sock company was a friend of the PTO vice president, and the basketball player knew a school dad who is a sports agent.

The Real Life Fair, held in conjunction with the Career Fair, plays out like a game. Students are assigned a salary and then learn to budget by visiting stations manned by parents to gather information about housing and transportation options and taxes. Finances are always an eye-opener: “[The students] were surprised how little there was when they broke their salary down to discretionary income,” Brandeberry says. The kids also get a chance to practice interviewing for a job.

The PTO helped parents adjust to middle school, too. The ambassador program—started last summer when 60 new families joined the school—has been a key outreach to new parents that has also spurred involvement. For the program, the PTO recruited not only its active volunteers but also those parents who were less involved.

Each ambassador receives a list of six or seven families and is asked to call them before the school year starts and again as important events near. They answer questions such as how to access the school’s online grade system or when the track season starts or what the school’s music opportunities are, as well as issue reminders for tasks like signing up online for teacher conferences. The ambassadors, wearing identifying lanyards, also attend school functions and make a point of chatting with parents.

“New parents have said that the ambassadors made them feel incredibly welcome, and we see a lot of those families being a lot more active than we would have anticipated,” says PTO president Holly Miller. “For the ambassadors themselves, they’re making new friends and helping us build community.”

Parents have also appreciated the Rosemont Council, which meets three or four times annually for an hour and offers parents an opportunity to hear from and question a handful of administrators, including the principal, in a low-key setting while the art teacher involves their young children in a project. It was established as a way to draw parents in since not many were attending PTO meetings.

Issues raised by parents are addressed, sometimes within weeks. For instance, after parents expressed concern about the lack of a keyboarding class, one was created and offered after school. Others voiced a desire for more academic support before school, so the administration worked on a rotating schedule with teachers and also enlisted adult volunteers to assist children in the library. “The council has definitely captured the interest of parents,” Miller says. “They feel they are heard.”

The PTO showed it wasn’t afraid to make changes. In addition to finding new ways to reach out to parents, it reevaluated fundraising and the popular back-to-school barbecue when it became clear that they required too much time and effort.

In the past, the PTO worked with the student council to sell cases of fresh apples four times a year—a lot of work for only $5,000 in profit and a dismal 14 percent participation rate. Instead, the group created a new fundraiser, the Coyote Fund Run, and pledged that if students met the goal of $20,000, there would be no other fundraisers during the year. Timed just before Halloween, the event also involved costumes, with each class choosing a theme like superheroes or cows. A DJ and a motivational speaker encouraged students as they ran. The event brought in $29,000, and participation spiked to 48 percent of students, a great success.

The back-to-school barbecue has also undergone some revision. The event had grown to include carnival games and huge inflatables, along with games for all ages. It had also spread out across the large school grounds, a situation that “was feeling out of control, and it became harder and harder to break even financially,” Miller says. So the traffic area was condensed and the number of activities reduced. In addition, teachers received free meal tickets to encourage them to attend the event with their families. “The tweaks to the program brought it back in line with the community-building experience that it was meant to be,” Miller says.

Changing to meet the needs of all stakeholders—that’s what makes the Rosemont Ridge PTO so effective at keeping middle school students and their parents interested and involved. “Our school is just getting better and better, and I know it’s because of the partnership of parents that are working with us,” says principal Debi Briggs-Crispin. “The PTO board is a few individuals, but the opportunities they provide for other parent involvement is vast. Then you have real positive energy throughout the community.”

They’ve Still Got It!

When the Rosemont Ridge Middle School PTO first won the National Parent Group of the Year award in 2004, it stood out for its great student-centered events and an enthusiastic base of parent volunteers. A lot has changed in the past 10 years, but those two things haven’t.

In the 2003-04 school year, parents reinvented the poorly attended school dances and launched “fun blasts,” where students could choose from a variety of activities, including dancing, video games, and watching a movie. That same year, the PTO held its first back-to-school barbecue and sponsored a career day for 8th graders. A decade later, those events remain popular with students. The PTO has built upon those successes, developing highly attended events for 6th and 7th graders.

“It shows clearly how some of the things we do have evolved from a strong sense of history and tradition,” says 2013-14 PTO president Holly Miller.

In 2013-14, the PTO might have had a successful base to build upon, but that doesn’t mean that it’s always been easy. In this year’s search, the PTO earned praise for the way it tweaked events that weren’t working as well as leaders had hoped.

“Rosemont has had to work really hard over the years to build its sense of community and reputation,” Miller says. “Two-time winners is even more reason to be proud!”

How To Approach Parents

Offer personal invitations. “Do not be afraid to pick up a phone or stop and talk to someone,” says Rosemont Ridge PTO president Holly Miller, whose board identifies different individuals to contact before each event.

Pay attention to parents. “There’s a perception that the PTO is so focused on planning everything to the nth degree that they don’t have time to slow down and talk to the people who come to events,” Miller says. “But my board made an effort to do just that.”

Don’t take no for an answer. Even when a parent turns down a request to get involved, continue the conversation. Explain why you need her skills. Emphasize that the time commitment can be minimal. Suggest a lower level of involvement. Many people want to participate but are hesitant and just need some coaxing.

Address concerns raised by parents. “You have to be open to the idea of asking for feedback and being able to react to it,” Miller says. “When we ask people what we can do or what they’d like to see, we never find that they grumble or are critical of the school. They have meaningful suggestions, and we thank them.”

About This Year’s Search

We’d like to thank each of the 240 groups that shared their stories in the 2014 Parent Group of the Year search. The work you do is truly inspiring!

Choosing just 10 winners from such a large field is never easy. In addition to the winners profiled here, the judges also chose many groups for honorable mention. For a complete list of honorable mentions, visit ptotoday.com/pgy. 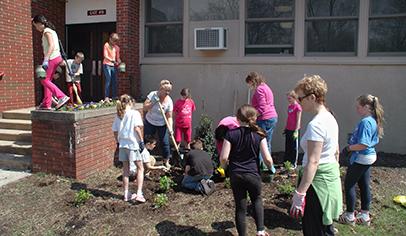