A Play's the Thing 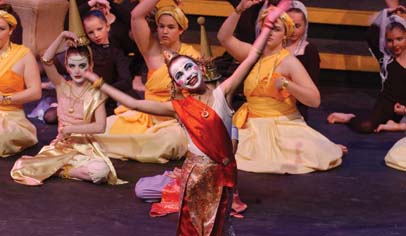 One parent group has turned its annual musical performance into a major fundraiser—and a major way to build community involvement.

The music swells.…The lights go up.…The curtain rises! Who can resist the lure of the stage, especially when it includes community members and schoolchildren?

The PTA in Amherst, N.H., has been putting on plays for 55 years. Although it began as a way to raise community spirit and provide theater to a town that saw little of it, the event has evolved into one of the group’s largest fundraisers. It’s something that generations anticipate and enjoy, with people turning out to support the school and see a high-quality production. And if Amherst is any example, small-town theater can generate artistic success: Last year’s production of The King and I was nominated for three New Hampshire Theatre awards.

A Work in Progress

Amherst began a community-based theater in the 1950s, primarily producing plays with adult casts on a small local stage. “Our first plays were small potatoes compared to what we do today,” says Michelle Emmond, who has been involved in the productions for nearly 30 years.

Emmond was a newlywed in her hometown when she saw an audition notice posted for the Amherst PTA’s first musical, a departure from its dramatic productions of years past. “With the success of that first musical, we began to alternate between dramas and musicals,” she recalls. “What we learned over time was that people loved the big-production musicals, so that’s what we’ve been doing for several years now.”

A turning point came in 1989 when Richard Rose, a community member with professional theater experience, took over as director. Rose substantially raised the bar on the productions’ quality: The cast was directed at a higher level, and other volunteers learned about maximizing rehearsal time and managing schedules.

Beginning in 1993, the productions were staged at the newly built Souhegan High School. It continues to be a community, PTA, and schools collaboration, with talent frequently coming from outside the area. “Over the years, the play has gained a reputation throughout the area theater community for being a quality production, and we have actors from other towns who have no direct ties to Amherst audition each year,” says Amherst PTA adviser and former president Kristin Desborough.

There’s also a focus on in-town recruitment—Emmond teaches at Amherst Middle School and runs a theater group there for younger students. “Now these kids get experience earlier,” she explains, “and feed right into the productions once they’re in high school.”

Many plays can be adapted to include more cast members, especially children. Kids can be added as orphans in Annie and Oliver. Fiddler on the Roof, The Sound of Music, and The King and I have multiple family and party scenes with lots of youngsters. And children make ideal munchkins for The Wizard of Oz. Choosing a family-friendly story also makes the evening suitable for all ages to attend.

The Amherst PTA began with smaller productions, but its current musicals demand more financial and logistical organization from everyone involved. Because the producer organizes key elements—props, costumes, and sets—the PTA splits the role among several people. “We also encourage job-sharing if people feel overwhelmed or simply can’t commit the time needed to a specific role,” Desborough adds.

Amherst volunteers typically start working on a show more than a year ahead of time, but they’ve found that productions follow the same general schedule year to year. A rough timeline for performances held the first week of April looks something like this:

15 months in advance: Choose play and secure rights to use scripts and music from licensing company. “These companies closely control who puts on their play and when it can be performed,” Desborough notes. “We couldn’t do Fiddler on the Roof a couple of years ago because it was already licensed to a touring company that would be performing in a neighboring town.”

6 to 7 months: Hold meetings between director and producer to verify that key people, such as choreographer and music director, are in place. Producers also begin monthly updates to PTA board and general membership.

3 months: Conduct auditions and finalize casting (with director, producer, choreographer, and music director). Begin rehearsals twice a week, with additional rehearsals for key roles. Choose script and get licenses for next year’s production.

End of April: Reconcile final expenses, and schedule dress rehearsal and performance dates with stage location for next year’s play.

Amherst PTA runs its musicals as a fundraiser. The group raises the $10,000 average annual production budget through a fall magazine sale, so the entire profit from the play pays for other programs and activities. Five performances are scheduled and nearly sell out the 430-seat theater. On average, the musical clears $14,000, all of which goes back to the district’s schools each year.

The largest expense by far is licensing royalties for the production. Musicians donate their time but are paid a stipend. A seamstress designs and makes many costumes to cut costs. Most actors pay for their costume supplies, and only a few costumes are rented or borrowed. In the future, the PTA also plans to give the seamstress a stipend.

The PTA creates DVDs that are sold at cost to cast and crew members only. Concessions are run by the Souhegan High School PTSA, and occasional raffles have netted $500 to $800.

More than 150 people are involved in an Amherst PTA theatrical production, and parents take part at every level: scene painters and costume designers, choreographers and set strikers, even rehearsal supervisors and theater chaperones. It’s a model that has repeatedly made for a successful show, with loyal volunteers staying involved for the long term. One couple designed and produced the playbills for 25 years running—even after their children had graduated from the schools. “If there’s one thing I can’t emphasize enough, it’s getting people involved who are passionate about theater,” Emmond says. “If you can develop a core of people who want to be involved, they will show up, year after year, in some capacity.”


Budget, The King and I