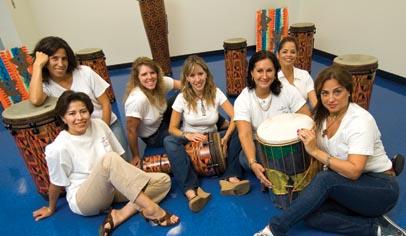 PTO Today's 2007 Parent Group of the Year for Outstanding Outreach to a Multicultural Parent Base found innovative ways to bring in families with limited English skills, achieving greater involvement and enthusiasm than ever before.

Parents at Renaissance Elementary Charter School faced obstacles in pulling together a successful PTO, including a diverse student body and a majority of families who live far from the school. PTO leaders found that the best way to reach out was through universal themes that transcend language, such as food, music, and dance. They brought parents together with a common goal of encouraging children to be healthy. And they worked harder at one-on-one communication, a less intimidating approach for parents unsure of their English.

The outreach paid off. Last year, the parent organization had events that were bigger and better than ever, greater attendance at meetings, and a renewed enthusiasm that permeated the school.

Involving all parents enabled the PTO to live out the school’s motto, “Celebrate and enjoy your differences,” says vice president Angela Larsen. “Our diversity is what makes our school wonderful,” she says. “It’s a great environment for kids to go to school in.”

Renaissance Elementary Charter was built on a corporate campus for parents who wanted their children to attend school close to their workplace. But it pulls students from all over Dade County, a large municipality about 2,000 square miles in size; parents commute from neighborhoods far and wide, and at the end of the work day they often want to return home rather than attend an evening PTO meeting or event.

The school, like the Miami-Dade County district, has always had many families from Central and South America. Over the years, the student body grew even more multicultural as families with Haitian, Caribbean, and Middle Eastern roots arrived in greater numbers.

“ ‘PTO’ is known in the United States,” Larsen says. “In other countries, they don’t have those organizations.” The school’s charter requires parents to volunteer 20 hours a year. But those are usually spent chaperoning field trips or helping in the classroom, which is time separate from the PTO, a difficult distinction to communicate to parents from other cultures. Some parents unfamiliar with the role of the organization thought the PTO was the place to bring complaints.

Last school year, PTO leaders sought to change that perception. All correspondence is available in Spanish, and leaders are willing to translate documents into other languages as needed. They started a sub-group called Very Important Parents; VIPs coordinate parent participation at each grade, ensuring good one-to-one communication. “We have found this method more effective than general meetings,” Larsen says. “Those who might not speak up due to language or cultural barriers usually feel more comfortable speaking with their VIP representatives.”

The group kicks off the school year with Music Under the Stars, an informal outdoor gathering that everyone can enjoy regardless of their native language. Holiday performances include all cultures and religions.

Renaissance PTO’s crowning event is an international food festival that has expanded every year since the school opened. More than 100 volunteers put in 500 hours to make the event a success. Parents recruited 70 sponsors, turning it into a communitywide celebration that extends well beyond the school. Each grade is assigned an area of the world, such as Latin America, Asia, or the Caribbean. Kids and parents set up a food booth, often cooked by parents or donated by a restaurant. Students also put together a dance native to their assigned part of the world.

Even with several successful events under their belts, PTO leaders still had to find a way to get parents to more mundane events like meetings. Serving dinner, often cooked by the principal, helped. But Renaissance parents faced a bigger task at home than feeding their kids: homework. Students often have at least two hours of it a night. Teachers agreed to give “no homework” passes to children whose parents attend PTO activities. Participation increased dramatically, especially among multicultural families.

This year, the PTO plans to build on its achievements by continuing its emphasis on the school’s diversity as a key to Renaissance’s identity and success. “If we can produce young adults who are culturally aware and multilingual,” Larsen says, “then we will have done our job at preparing them to live in tomorrow’s world.”


Advice from Renaissance PTO to reach out to all parents:

# tatiana 2008-06-02 17:38
I am a third grader at RECS and it is not a bad school.It is an awesome school with great hardworking teachers and just to tell you It's a great school it's a five star,A+ school.
Refresh comments list
RSS feed for comments to this post