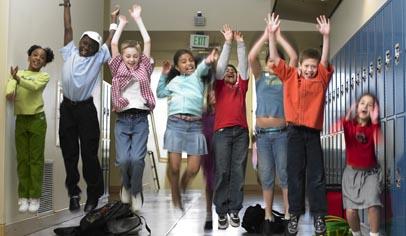 Simple touches can transform a good event into a four-star success.

The prospect of trudging from the parking lot on a cold November day is what kept some people from attending the annual Grandparents Lunch at Webber Elementary in Lake Orion, Mich. So the PTO decided to offer valet parking. “The grandparents just loved it,” says PTO president Anita Beaman.

This extra, which was advertised on the school marquee and in newsletters, had attendance skyrocketing from 150 to almost 400, a huge number for a school with just under 500 students. “The increase was definitely due to the valet parking,” Beaman says. “Some people may feel awkward about coming, especially if they have a handicap. They wonder where they’re going to park, how they’re going to walk in.”

Eight PTO volunteers greeted attendees and escorted inside those who needed extra help. Spaces in the parking lot were numbered, and those numbers and a description of the car were written on premade tags. The response to the valet parking has been so enthusiastic that the PTO is planning to do it more often. “It was such a big hit that we talked about doing it at parent-teacher conferences in January,” says Beaman. “The parking [area] is too small, and parents have to park across the street, so we’re considering it as the weather gets colder.”

Such a simple addition can make an enormous difference. The Webber PTO realized that again when they purchased three Webkinz, stuffed animals that allow their owners to participate in related online activities. Anyone who attended Family Bingo Night was given a free raffle ticket for a chance to win one of the popular creatures. “All day, school was buzzing,” Beaman says. “Kids really pushed for their families to go.” Two hundred people turned out, twice as many as the year before.

Of course, attendance isn’t the only measure of success. Sometimes a special touch makes an event particularly memorable. At Renaissance Elementary Charter School in Miami, Fla., no one is likely to forget the October evening of Music Under the Stars. Musical groups from the middle school performed outdoors, and the new vice principal sang karaoke Sinatra classics. But the biggest hit proved to be the glow sticks distributed by the PTO. “That still sort of amazes me,” says PTO vice president Angela Larsen. “That was the best thing. Everybody, even little kids, wanted glow necklaces as they were dancing to the music. We never expected that to go over so well.”

Added extras also contribute to the success of the Luminaria Run, an annual fundraiser for Black Mountain Elementary in Scottsdale, Ariz. Beginning at dusk on a December evening, more than 1,000 participants run along a course lighted with 4,000 candles inside bags of sand as hot-air balloons hover overhead. At the end of the race, runners are treated to chili and frybread, a local specialty. The five-year-old PTO-sponsored event, which precedes the town’s annual Christmas pageant, brings in more than $10,000 for the school, according to Meribeth Reeves, the Black Mountain Elementary PTO first copresident.

Perhaps not as dramatic—but still just as appreciated—are the flourishes added to Teacher Appreciation Week by the PTO at the Gretchen Everhart School in Tallahassee, Fla. At a catered luncheon, teachers receive gift bags and often flowers. Some years, they can add their names to a list for complimentary 15-minute massages from a local therapist. “If no one was behind them right then, they’d ask the therapist to keep going until the next teacher arrived,” says PTO president Debra Taube. But probably the most popular act of gratitude is the car washes. The teachers sign up to have their cars cleaned, and PTO members place a cone in each teacher’s parking space so all vehicles end up back where they started. The most talked-about part of the process is the use of a leaf blower to dry the cars quickly.

Innovation has also transformed the annual fall festival at Greenbrook Elementary in Kendall Park, N.J. Two years ago, in an effort to involve parents in an activity open to children of all ages, the PTO purchased straw so families could make their own scarecrows. Each family that wished to participate brought a pair of pantyhose plus old clothes (shirt, pants, and hat). During the festival, they stuffed the pantyhose and dressed the scarecrow, erecting him later in their front yards. Another activity included in the $5-per-person cost was pumpkin painting, with the PTO supplying not only stickers, paint, and markers but also old shirts to protect the participants’ clothing. And as an alternative to bobbing for apples, groups of four children kneeled with hands behind their backs and tried to bite their own doughnuts, which dangled from a string attached to a pole.

Sometimes adding a theme to an activity makes it more distinctive. This approach is taken to a dazzling extreme at the Newell School District in South Dakota. A simple movie night, for example, became extraordinary when the PTO added extras related to the showing of March of the Penguins. After a free supper and the movie, kids moved from one “igloo” (pup tent) to another to be read to by local high school students and receive free books. Families received an old bowling pin to create their own “penguin” to take home. They smeared on black and white paint; attached eyes, nose, and mouth, as well as plastic eggs that served as feet; and mixed colored sugar and candy in a plastic test tube to take home as “penguin food.”

A second themed event was camping night. Again, tents were set up outside for older children to read to younger ones, and kids with enough stamps on their reading passports received free books. The principal dressed as a park ranger, and a high schooler came as a character from the children’s book Where the Wild Things Are; younger children made themselves up as ducks. Everyone gathered around a campfire to sing and roast marshmallows. The meal included grilled hot dogs and hot chocolate.

Yet another theme was community services night, held at the city park to highlight the community’s first-responders, including the state national guard, local ambulance service, two fire departments, sheriff’s office, and department of game, fish, and parks. A search-and-rescue team brought an old minivan and used the jaws of life to knock out windows and take off the roof to rescue the ambulance crew, who portrayed victims.

“The kids were totally impressed,” says PTO president Heather Kari. “They got to sit in the trucks and talk with the uniformed folks. It was neat to see. In fact, it made the front page of our local paper.”

In a rural area in which many families live 25 miles outside of town, the Newell PTO struggles with attendance at meetings. But their themed events draw hundreds of people even though the entire population for grades K-12 is only about 270 students. “The kids like a new theme every time,” Kari says.

Motifs also help attract families at Christopher Columbus Family Academy in New Haven, Conn., where PTO meetings are combined with potluck dinners and family nights. After dinner and a PTO meeting on the “garden delight” theme night, families plant their own gardens at stations that have soil and seeds as well as planters made from egg cartons and plastic soda bottles.

“Parents like knowing that the evening is going to be based on something,” says parent team vice president Marla Cruz Berrios. “They’re not just going to sit there and listen to you babble on. They’re also taking part in some activity that they’re eager to learn about.” Other themes include Hispanic heritage, pajamas, science, winter crafts, and mothers. On “brotherhood night,” soul food was served and a gospel choir performed. These evenings also usually include performances by different groups of students.

Themes are one way to boost PTO meeting attendance. So are added benefits. Renaissance gives out “no homework” passes and blends meetings with activities like a book fair or tree-lighting ceremony. Parents at this charter school often face an onerous commute because students are drawn from the upper Florida Keys in the south through West Palm Beach some 100 miles to the north. “It was terrible to get people to stay for evening events,” Larsen says. “If kids don’t have to do homework, that was a big attraction. We also offer dinner so they don’t have to cook at home. And if we combine a PTO meeting with some other event, we get 300 people there.”

Greenbrook Elementary also has food at its meetings but adds a twist. Those who attend bring not only dishes to share but also their recipes. These are collected and made into a book, which is distributed free to every family at the end of the year. The kitchen help is welcomed by all parents, especially PTO copresidents Heidi Rone and Kim Bunch, who between them have six children, including twins and triplets.

Any event can be made special with a little imagination. At Prairie Grove (Ill.) Elementary and Junior High schools, ice-cream socials are livelier than might be expected. This year will include a free laser light show. Last year, a “whip guy” performed as the audience snacked on ice-cream sundaes throughout the no-charge evening. “He put something on his head and twirled the whip around and whipped it off his head or cut it in half out of his mouth,” explains PTO president Joan Kriete. “It made really loud noises.”