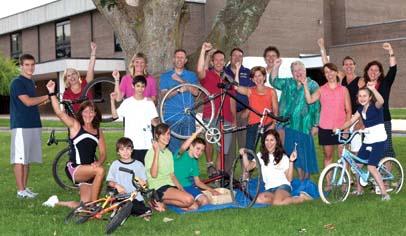 By collecting and repairing bicycles for low-income families, PTO Today's 2009 Parent Group of the Year for Outstanding Community Service Project turned a simple annual event into a community-building exercise.

Community service is a long-standing tradition for families at Charles F. Patton Middle School in Kennett Square, Pa. For the past 15 years, the school's PTO has organized a bike drive to benefit needy kids during the winter holidays. Over time, the event grew to include multiple community groups and to provide low-income families with food, toys, and winter coats, as well. The Patton Middle School PTO was recognized as the 2009 Parent Group of the Year for Outstanding Community Service Project for its ongoing efforts in organizing this holiday event.

The annual project collects, refurbishes, and distributes more than 200 bikes to children from low-income families each year, giving them a happy holiday season they otherwise might not have had. What makes this bike drive even more remarkable is the fact that most of the recipients are complete strangers—not Patton Middle School students.

Bike drive cochair Barb LaChance says most of Patton's 1,008 students come from middle-class families that can afford items like bicycles. But many kids in a neighboring community with a large immigrant population aren't so fortunate. So the Patton Middle School PTO and other parent groups in the Unionville-Chadds Ford School District in southeastern Pennsylvania have decided to help. While Patton Middle School parents lead the bike drive, the other PTOs in the six-school district contribute money and volunteer time to the campaign. Patton Middle's PTO, which has an annual budget of $40,000, spends about $800 on the project each year.

"It's a great event because it has pulled in people from our surrounding communities," says Katy Donovan, who served as the Patton Middle School PTO president for the past two years. "One PTO probably wouldn't be able to pull it off, but together, we can."

Parent volunteers hold collection days on three autumn Saturdays. However, the campaign has become so well-known that organizers often get calls throughout the year from people wanting to donate bicycles. "It's quite a process," LaChance says. Principal Bruce Vosburgh assists by offering his garage for storage space.

Even during the summer, organizers are getting ready for the fall campaign by scheduling activities, renting trucks, storing equipment, printing signs, and ordering spare parts. "We've been doing this for a while, so we've got the process streamlined," says bike drive cochair Linda Fisher. Even so, Fisher and LaChance work year-round on the project.

Most of the bikes are in good shape and are donated simply because the previous owners have outgrown them. But some are in need of repairs, and the Patton Middle School PTO team has developed quite an expertise in this area over the years. On cleanup day, volunteers replace defective chains, install new seats, and substitute new handlebar covers for worn-out ones. If a child needs training wheels, volunteers can install them on the spot. In addition, every child gets a brand-new safety helmet.

When the bike drive began in the mid-1990s, organizers worried about collecting enough bicycles to meet demand. The first year, for example, volunteers distributed 20 bikes. But now that the annual event has become so popular, the biggest challenges are storing and repairing the hundreds of bikes donated. Thankfully, more than 200 volunteers turned out for last year's cleanup day.

One of the best aspects of cleanup day is that students are involved just as much as parents. Teens from Unionville High School volunteer to work alongside the middle school kids. Area scout troops regularly lend a hand. Even elementary school students help out by washing the used bikes.

"It's a great day," Vosburgh says. "We have people with kids at the school involved and people who don't have kids here involved."

All the hard work leads to the giveaway day shortly before Christmas, undoubtedly the most eagerly anticipated day of the campaign. PTO leaders work with a local food pantry to identify families in need. Everyone gathers at a local church, and the bikes are given to the children and their grateful parents. "The kids try them out, sit on them, and pick the one they want," Fisher says. "They're just so thrilled."

Donovan says she often gets more emotional watching the parents' reactions than the children's. Seeing their happiness for their children is something she can relate to as a parent. "It's a simple pleasure we take for granted that we'll be able to give our kids something special for Christmas," she says.

More than anything, the joys of giveaway day lure back volunteers like LaChance year after year. She has participated even in years when she didn't have kids enrolled at Patton Middle School, and once her youngest child goes to high school, she still plans to stay involved. "It's the kind of thing you can't get away from," she says. "It's something you get very passionate about."