Dodgeball Tournament Is a Big Hit 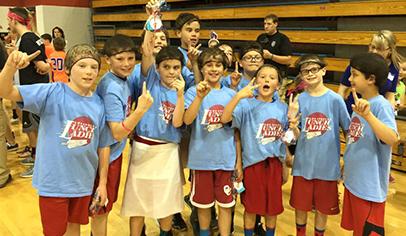 An Oklahoma PTO taps into kids’ love of an old-fashioned game for big fun (and profit).

The Bixby (Okla). Middle School PTO took a simple schoolyard game and used students’ innate competitiveness to turn it into the group’s biggest fundraiser ever.

In April 2015, the 7th and 8th grade school held its sixth annual dodgeball tournament. More than 450 players competed in the six-hour event. The tournament was held double-elimination style, so each student participated in at least two five-minute games.

The tournament raised a total of $9,300, in part by selling $5 “life bands” that allowed students hit by a dodgeball to get another chance at “life” and reenter the match once per game. “There was a competitive nature,” says Liz Huls, a PTO member and mother of a 7th grader. “The kids want to go back into the game.”

In addition to the middle school, the tournament was open to students from the three district intermediate schools of 4th through 6th graders. Approximately 440 students and 18 teachers participated in the 2014-15 tournament. They were broken down into 34 intermediate teams, 10 middle school teams, and two teacher teams. Each student team had 10 players.

The competitive edge was softened with the addition of some fun components, including a team costume contest, team name contest, and—new the previous year—a tournament slogan contest. Parents narrowed down the slogan entries from 20 to four, and students voted on the final four during lunch. The winning entry, “So You Think You Can Dodge,” was printed on T-shirts for every participant.

The PTO recruited 70 volunteers to run the event. The task proved a bit difficult at first, which prompted Huls to reach out to local high schools and universities for students in need of service hours. “We divided the shifts into an hour-and-a-half or two-hour shifts, so volunteers didn’t have to work for a long period of time,” Huls says. “The college kids came over and did the last shift.”

During their shifts, some volunteers set up bumpers to divide the gym into three courts while some manned the life band table. Court volunteers supervised the games, took students’ life bands, monitored the players coming in and out of the game, and made sure each game finished on time.

Besides the life bands, the PTO made money from advertising flags, which they displayed at the tournament with the names of its three sponsors. Huls says the group plans to put up the flags during events throughout this school year. There was also a fee of $100 per team, but no admission fee for fans or parents. Some of the money raised went toward iTunes gift cards and candy for the winners of the intermediate and middle school divisions, as well as for best team names and best costumes.

The teacher competition was held as a “halftime” event. A trophy travels from school to school based on the teacher tournament winner. “I think the students loved to see their teachers compete,” Huls says. “There was a lot of cheering from the stands, and a number of teachers came in costume.”

Huls suggests that schools hosting a tournament should have at least four people organizing the event, with one person in charge of sponsorship and advertising. “If you have someone who loves numbers and details, that person can run with it,” she says.

“It’s a great activity to bring together a school district,” she says. “Our schools all have these individual activities and not a lot of big activities where the kids come together.”

"We used bumpers we borrowed from the local YMCA. They are triangular and square, black and padded. Not sure what they're made of. I'm not sure where the school got the waiver, but we've used it for 9 years and it is approved by our administration."
Refresh comments list
RSS feed for comments to this post