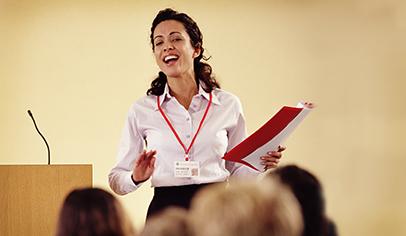 Some advance preparation and a few best practices will help your next presentation go smoothly despite any butterflies.

You’re fired up for the new school year, ready to spread the message about parent involvement and make a difference in your child’s school, one volunteer at a time. There’s just one thing that dampens your enthusiasm: the thought of giving a speech at your parent group’s first event.

Public speaking consistently ranks among people’s top fears. Even if you’re accustomed to making presentations at work or giving pep talks to the T-ball team, there’s something about a room full of people that can set your nerves on edge.

It’s only natural to be a little nervous. After all, you want to make a good first impression, and the way you handle speaking to the group will give people an idea of the kind of leader you are. But don’t worry if you trip over a few words or mispronounce someone’s name. Effective public speaking is more about having a positive attitude and conveying a message than giving a perfect performance. Take these simple steps to become more comfortable speaking to a group and make the most of every opportunity to reach an audience.

First, think about what you want to accomplish with your talk. Do you want to inform parents about an upcoming event? Recruit volunteers? Motivate students to sell more magazine subscriptions?

Tailor your message to the audience. Parents may be motivated by discussion of big, long-term goals. Most students, on the other hand, would be more interested in finding out how their classroom could earn an ice-cream party.

Keep your remarks brief. Parents and kids alike will get restless if you talk too long. Choose just two or three key points that you want to emphasize. It’s a good idea to write them down on an index card in case you lose track. If you’re worried about forgetting something, print out a copy of your remarks in a large font to make it easier to read.

Next, practice your speech a few times in front of a mirror or for family members. The more familiar you are with the speech, the less likely you’ll be to ramble or lose your train of thought. “It might seem kind of goofy when you’re first doing it, but by the end of the school year you won’t have to do it like that anymore because you’ll have more confidence,” says Dianna Flett, immediate past president of the Margaret Brent Elementary PTO in Stafford, Va.

Ask a few people for feedback to make sure you’re getting your message across clearly, advises Sherri Raftery, a member of the St. Pius V School PTO board in Lynn, Mass. “Sometimes what you think you’re saying may not be what other people are hearing, so it’s good to say it out loud in front of others,” she says.

Don’t Try To Be Perfect

Speaking in front of a group can feel like going under a microscope. Every “uh” seems magnified, and you’re sure everyone can see how nervous you are. Not so—everybody makes mistakes, and they’re not as obvious to others as you might think.

“As long as you’re sticking to the content and the delivery, they’re not really going to notice that you’re nervous,” says Raftery, who’s also a district officer for Toastmasters International, a nonprofit that helps members develop leadership and speaking skills. Raftery is an amateur actor and does standup comedy from time to time, as well.

Flett formerly worked as an Army intelligence officer, addressing large groups of soldiers headed to war. But she admits that when it came to speaking at PTO meetings, her pulse would race and her stomach would start gurgling. She kept the nervousness in perspective by focusing on the work of the PTO, not on herself.

“We’re so concerned about how we look to other people,” Flett says. “We’ve already proved who we are by stepping up to do the job that we’re doing, and we need to trust that parents are going to respect that and understand the fact that everybody makes mistakes and everybody gets nervous.”

If you’re concerned that your anxiety shows, you can admit that you don’t do much public speaking and ask attendees for their patience. It will take some pressure off of you and gain the sympathy of your listeners, who probably have had similar nervous moments themselves.

Connect With the Audience

Another way to combat nervousness is to interact with your listeners so that you feel less separated from them. You might want to break the ice by sharing a few things about yourself (you have a daughter in 4th grade, for example), or telling a personal story that other parents can relate to.

You might ask people to raise their hands if they’ve had a child at the school before. Or you could ask attendees to introduce themselves to the person next to them to set a welcoming tone. “That always helps me as an icebreaker, and it helps me calm down, too, so I don’t take off running and lose everybody behind me,” Flett says. “Then you get up behind the podium and say ‘Hey, I’m Dianna.’”

It’s important to think about how you present yourself. Not only will you be sharing information with your group; you’ll also be showing the community what kind of leader you are. You might be nervous, but you can still be cheerful and welcoming.

“What you’re really trying to do is introduce two or three aspects of your organization to people that are really going to get them motivated to become a part of who you are,” Flett says.

Go With the Flow

The truth is that no matter how well-prepared you are for a speech, unexpected situations will arise. Experienced speakers have a bag of tricks at the ready to help them deal with common problems. If the microphone’s not working or they flub a line, they make a joke about it.

For parent group leaders, one of the most unpredictable factors is the behavior of children. Raftery recalls giving a speech to the entire school in honor of a retiring janitor. Although she had practiced the speech, she hadn’t counted on the group of talkative 2nd graders—including her daughter—who shared the stage with her at the event. She pressed ahead, keeping her volume above the low rumble of the whispering kids.

Flett was talking about the importance of politeness at the 5th grade moving-up ceremony when the 5th graders’ conversation threatened to eclipse her talk. Rather than scold the graduates, she hushed them with a spirited cry of “Oh, no, you didn’t,” which drew laughs from kids and parents alike. Her advice to others: “Break it up with a recognition of what’s going on, and move on from there.”

Delivering a speech doesn’t have to be a nerve-racking experience. Take time to prepare your remarks and practice, but don’t be too hard on yourself if you make a mistake. Whether it’s your first time behind the podium or you’re an old pro, the key to effective public speaking is the same: Just relax and be yourself.

# Denise 2009-02-05 06:27
Thank-You for this article! I needed this lift to help me over come my fear of speaking to a large group of people.Encouragement like this will make all of us a better speaker,listener and advisor.Keep up the good work again Thank-You
Refresh comments list
RSS feed for comments to this post