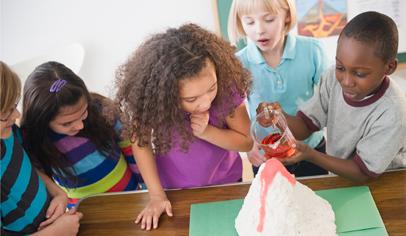 Science can be fun and exciting for students. Use these ideas and approaches to create engaging science-related activities.

Hosting a science-related program requires PTO parents to be aware of instructional issues as well as logistical ones. A good event should work hand in hand with the school’s own science curriculum. PTO leaders across the country are meeting these challenges, and are finding valuable ways to support science education in their schools.

The Belvidere (N.J.) PTO's two-day Science Expo brought in outside experts who presented engaging, hands-on demonstrations for students in kindergarten through 8th grade, such as how to make salt and pepper “dance” using static electricity. Students also had an opportunity to showcase their own science projects in an exhibit the PTO dubbed “Celebrating Our Student Scientists.”

The Belvidere PTO serves the entire 900-student school district. The first step to organizing the event was to work with the district’s science teachers to determine grade-appropriate topics for elementary and middle school students, says enrichment committee chair Kim Beaney. From there, the PTO searched for people with scientific expertise to present compelling programs.

A representative from the Rutgers University physics department gave demonstrations involving laying on a bed of nails, exploding hydrogen balloons, and making a pickle into a light bulb by attaching electrodes carrying household current. The university offers the traveling physics demonstration for a fee as part of its community outreach program. However, such touring events may be popular, so PTO leaders should line these up well in advance.

A nearby children’s science museum brought exhibits on biology, chemistry, and electricity. Presenters showed 4th through 6th graders how to use a microscope, while kindergartners through 3rd graders mixed together (safe) chemicals to create cool reactions.

For the older kids, two detectives from the New Jersey State Police crime scene unit gave a demonstration of the forensic science techniques they use to crack tough cases, much like the popular CSI TV shows. Best of all, the state police gave their presentation free of charge. Many other state and city police departments have similar crime scene investigation teams, so PTOs should explore these resources when planning a science event.

Other exhibits included a presentation on wild animals, given by an area reservoir and en­vironmental preserve; a discussion of Newton’s three laws of motion by a local flight instructor; and a session on building wooden airplanes, offered by a local hobby store.

Hiring outside vendors to give science presentations generally costs several hundred dollars per hour. Having enough presenters for a comprehensive science expo easily can cost thousands of dollars. Despite the large scale of the event, the Belvidere PTO only spent $500 out of pocket, thanks to the group’s successful push for sponsorships. (Much of the money the PTO spent went to buy lunch for the 40 parent volunteers.)

Parents made calls to the area’s major employers, particularly if those businesses had some sort of science focus. The PTO received more than $4,000 in sponsorships for the science expo and several thousand dollars worth of in-kind donations by presenters who gave their time for free.

Every spring, the PTO at Israel Loring El­ementary in Sudbury, Mass., holds an old-fashioned science fair. Unlike events involving outside presenters, the Loring science expo engages students to create scientific exhibits for display.

One student created a demonstration explaining the explosion of a soda bottle. Another student conducted experiments to find out whether ice cream can conduct electricity. Twenty-six “guest scientists” from local businesses and universities wore white lab coats and discussed the projects with their young creators.

“The kids loved having someone ask questions about their work and really worked hard to prepare their presentations,” says event coordinator Renata Pomponi. “Having them wear lab coats and carry clipboards made them stand out in the crowd of [more than] 500 people and really added a professional touch to the evening.”

The Loring PTO began planning in September for the March event. Parents divided themselves into three committees: logistics, publicity, and science. In all, 45 parents, teachers, and community volunteers helped out with this year’s event.

Pomponi said the PTO has learned from its experiences. Rather than leave students on their own to come up with projects, the PTO built a collection of 100 of the best experiments, organized by topic and grade level.

“We also created a page on our PTO website with simple instructions for parents and kids on the whole expo process,” Pomponi says. “This made it much easier for kids to find experiments and for parents who may not have a science background to help them.”

Science events don’t have to be big to be successful. Most science events put on by PTOs are done on a smaller scale than those run by the Belvidere and Loring PTOs. Many groups plan science-related family nights that focus on a specific area, such as astronomy, or a specific habitat, like the ocean.

An astronomy family night organized by the Peters Canyon Elementary PTO in Tustin, Calif., was scheduled when Jupiter and Uranus were in view. Students and parents could look at the planets through high-powered telescopes provided by an astronomy club. The Ocean Awareness Night put on by the Horn Academy in Bellaire, Texas, featured live sharks and sand samples from across the world.

The right formula for any science night, small or large, is to find a topic that can be demonstrated in a visually appealing way and a presenter who can explain the topic in simple terms. Once the cool factor kicks in, kids won’t even realize they’re learning.

Recruit sponsors. Link sponsorships to specific expenditures rather than asking for a blank check. Companies in scientific fields may be particularly receptive to sponsoring science-theme events.

Coordinate efforts with school staff. Work with your school’s faculty to ensure that science-related events support and enhance the curriculum.

Look for outside help. Many universities, police departments, and businesses have scientific experts who will come to your school—often at no charge.

Schedule events at convenient times for parents. If you have a multiday event, for example, make sure at least one day features evening activities so that working parents can attend.

Don’t forget to watch the bottom line. There are many excellent presenters out there, but they may come with a steep price tag. Don’t lose sight of your budget when lining up presenters.

Interested in running your own science event? Our free Family Science Night kit has everything you need to run a great event, including planning tips, invitation flyers, and lots of science experiments! As well, our free Guide to Supporting STEM Learning for PTOs and PTAs provides a comprehensive list of hands-on STEM activities and much more.

Originally published in 2011 and updated regularly

# Marianne Buttner 2011-09-14 00:54
Wonderful article. Renata Pomponi's comments about the adults wearing lab coats and carrying clipboards and the information about the website suggest a well-prepared experience for the students.
Refresh comments list
RSS feed for comments to this post