This time, Dad has to volunteer.

Editor’s note: This article was originally published in 2008. Despite its age, we think it’s a very relatable story that still holds up today!

We’ve been hearing a lot about change lately. The presidential primary candidates are calling for it. The climate is threatening it. We see it happen daily to gas prices, and as a result there’s less of it jingling in our pockets.

We’re experiencing this last type at my house. For years, I’ve been the primary volunteer of the family. My husband has always served more of a support role: driving the kids to events when I have to be there early for setup; driving them home when I need to stay late for cleanup; coming home from work on time to free me up for PTO meetings. But in the past few months, a confluence of events have opened up a volunteer role that only he can fill.


I showed my husband the volunteer request form. “I can’t go. It has to be you; we have a boy,” I explained.

He agreed almost immediately. But as the date approaches and the reality of what he has to do starts to set in, I have a feeling he may have second thoughts. There have already been signs. “So, what exactly does a chaperone do?” he asked. Our daughter, a veteran of the 4th grade field trip, answered: “Mostly they keep the kids from sneaking out the dorm windows at night.” I watched my husband process that information, no doubt envisioning himself patrolling the perimeter of the bunks, sweeping his flashlight across the windows looking for dangling legs and feet.

Then there was the criminal background check. Our son brought home an envelope with the words “CORI form” written accusingly on it in thick red letters.

“Have you ever been arrested, Dad?” he asked.

My husband and I exchanged glances. There was that near-miss in Colorado involving fishing with an illegal license. And back in the Vietnam War era, he was herded along with his fellow protesters toward a waiting state police bus. But he never did make it on board. “Nope. I’ve never been arrested,” he said. Then his voice brightened as he realized he now had a way out of future volunteer commitments. “But there’s always that possibility!”

I’m sure he’ll do fine, but I’m not holding out hope that the experience will launch a lifelong career as a school volunteer. Then again, who knows? Three days in the company of several hundred 4th graders may toughen him up enough to withstand any and all volunteer experiences. Change does happen; we know that. And he’s already demonstrated the first essential quality of anyone who volunteers to work with kids: a willingness to dive into the unknown. 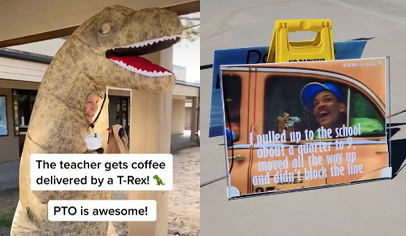